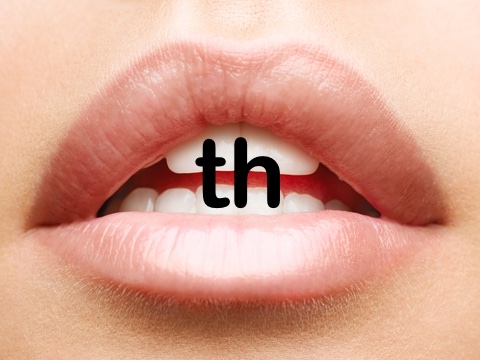 Many of native English speakers are wondering, why French people substitutes the TH sound with a Z sound? For English speakers (and many of non-French speakers) the two sound are really different. Over many decades, the European French language, has lost some of its vowel sounds. The language, in term of sound has been simplified.  That makes difficult for this group of speakers to identify new sound in a foreign language. For instance, the O vowels is pronounced only in one way in France, where in Quebec or Switzerland the O is pronounced differently as per the original French language

Back to our TH sound. There are two ways to pronounce this sound correctly:

How to pronounce a Z sound

Put your tongue to the roof of the mouth with the tip close to the upper backside of the top front teeth. The tongue is kept tense. Blow air through your mouth and make your vocal cords vibrate.

When you have a look on both sketches above, the tongue is almost in the same place (a bit higher in the case of the Z sound) and the sound for French speaker seems to be identical. Hence the confusion.

If a French native speaker wants to improve the TH pronunciation, the method 2 (tongue between both front teeth). is maybe more appropriated. The speed speech will be lower, but the pronunciation will be more accurate and easier to understand for your audience. When you will master the TH sound, you can try to use the first methods, that will make sounds transition smother and your speech will sound more natural